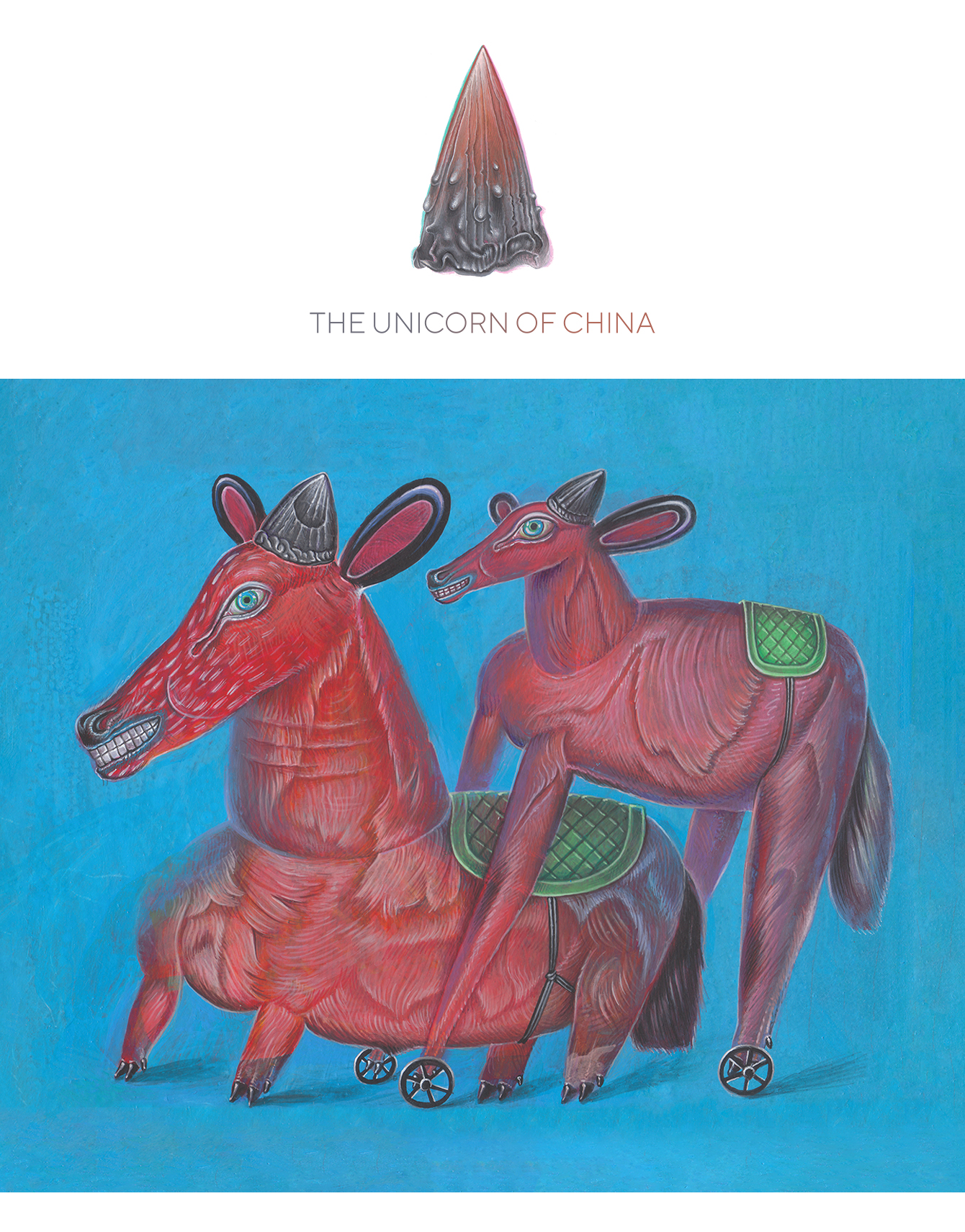 The Chinese Unicorn, the k’i-lin, is one of the four animals of good omen; the others are the dragon, the phoenix, and the tortoise. The Unicorn is foremost of all the 360 creatures that live on land. It has the body of a deer, the tail of an ox, and the hooves of a horse. Its short horn, which grows out of its forehead, is made of flesh; its coat, on its back, is of five mixed colours, while its belly is brown or yellow. It is so gentle that when it walks it is careful not to tread on the tiniest living creature and will not even eat live grass but only what is dead. Its appearance foretells the birth of an upright ruler. To wound the Chinese Unicorn or to come across its dead body is unlucky. The span of this animal’s natural life is a thousand years.

When Confucius’ mother bore him in her womb, the spirits of the five planets brought her an animal ‘having the shape of a cow, scales of a dragon, and a horn on its forehead’. This is the way Soothill reports the annunciation; a variant of this given by Wilhelm tells that the animal appeared on its own and spat out a jade tablet on which these words were read:

Son of mountain crystal [or of the essence of water], when the dynasty crumbles, thou shalt rule as a throneless king.

Seventy years later, some hunters killed a k’i-lin which still had a bit of ribbon around its horn that Confucius’ mother had tied there. Confucius went to look at the Unicorn and wept because he felt what the death of this innocent and mysterious animal foretold, and because in that ribbon lay his past.

In the thirteenth century, a scouting expedition of the Emperor Genghis Khan, who had undertaken the invasion of India, met a creature in the desert ‘like a deer, with a head like that of a horse, one horn on its forehead, and green hair on its body’, which addressed them, saying, ‘It is time for your master to return to his own land.’ One of Genghis’ Chinese ministers, upon consultation, explained to him that the animal was a chio-tuan, a variety of the k’i-lin. ‘For four years the great army has been warring in western regions,’ he said. ‘Heaven, which has a horror of bloodshed, gives warning through the Chio-tuan. Spare the Empire for Heaven’s sake; moderation will give boundless pleasure.’ The Emperor desisted in his war plans.

Twenty-two centuries before the Christian era, one of the judges of the Emperor Shun was in possession of a ‘onehorned goat’ which refused to attack the wrongly accused but would butt the guilty.

It is universally held that the unicorn is a supernatural being and of auspicious omen; so say the odes, the annals, the biographies of worthies, and other texts whose

authority is unimpeachable. Even village women and children know that the unicorn is a lucky sign. But this animal does not figure among the barnyard animals, it is not always easy to come across, it does not lend itself to zoological classification. Nor is it like the horse or bull, the wolf or deer. In such circumstances we may be face to face with a unicorn and not know for sure that we are. We know that a certain animal with a mane is a horse and that a certain animal with horns is a bull. We do not know what the unicorn looks like.